This is the probably the most sophisticated, data-driven, scientifically backed gender attractiveness inequality visualization you’ll ever see: 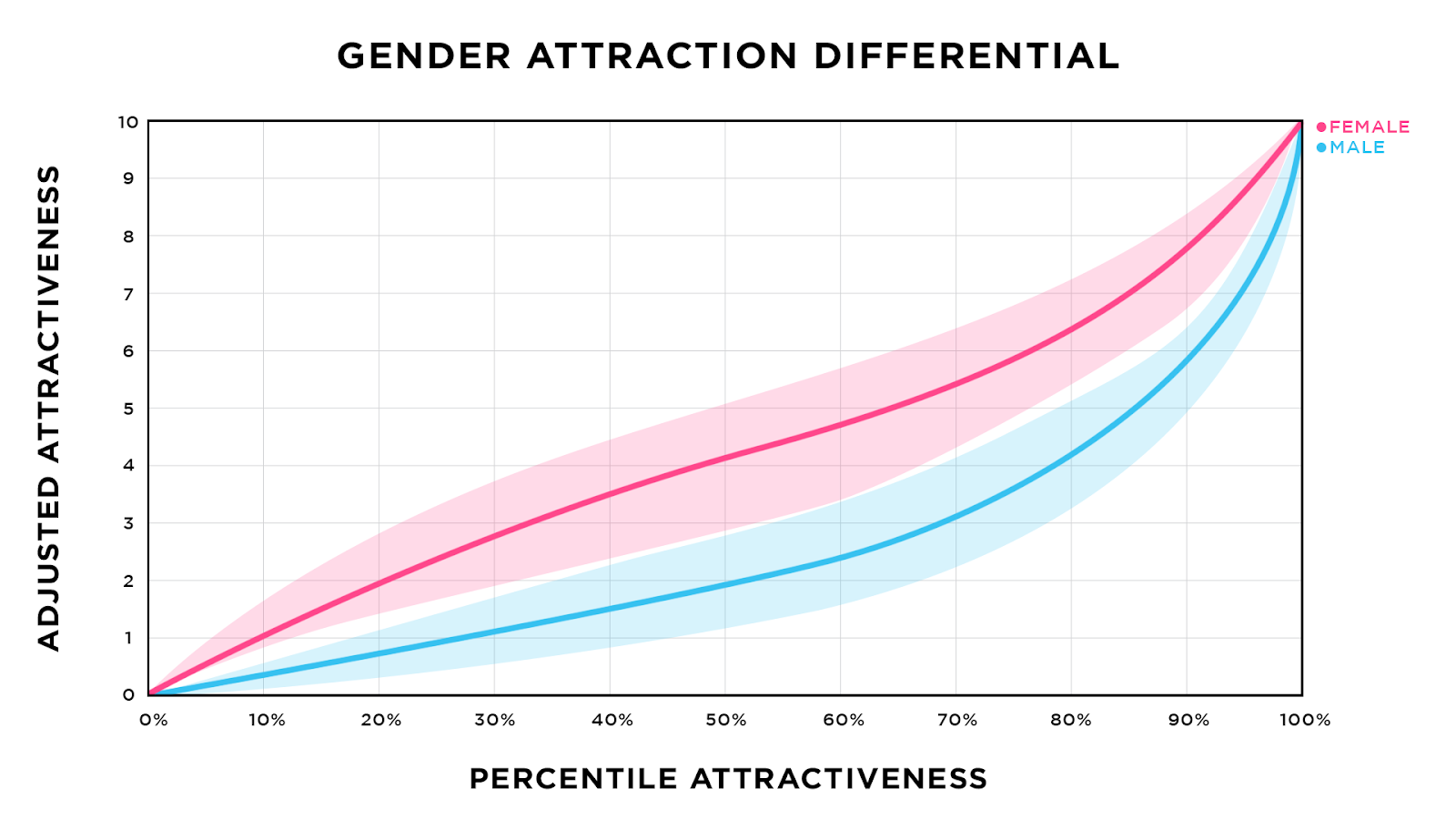 To fully understand it, we first need to see how it was made.

Let’s talk about the between-gender attractiveness differential. Most people find women to be objectively more attractive than men. One survey found that 58% of people hold this opinion [1].

This beauty discrepancy cannot be entirely explained by makeup, as even female children are rated more attractive than male children in both the UK [NCDS] and the US [Add Health].

The more detailed US dataset contains teachers’ ratings of their students’ attractiveness (on a 5-category scale) at age 7, 11, and 16. Here is the US dataset extrapolated and visualized as a cumulative graph.

Now, I don’t find the aforementioned datasets particularly interesting or useful for two reasons. Firstly, I am primarily interested in beauty as it relates to heterosexual relationships, and I don’t find childhood attractiveness applicable (or even appropriate) to study in this context. Secondly, these datasets contain intragender ratings (males rating males; females rating females), which aren’t actually relevant in heterosexual relationships, where the only thing that matters is how men rate women, and how women rate men.

The following research graph visualizes the data from the “Unspecified dating platform” (the researchers of the study did not disclose which platform they used to gather data).

OkCupid, Unspecified Dating Platform and HotOrNot agree on the basic finding that women rate male attractiveness lower than males rate female attractiveness, but OkCupid provided the most detailed information, including 7 data points for both sexes, visualized in a normal distribution graph. I turned the normal distribution to a cumulative graph, which in mathematical terms is called a Lorenz curve.

This is how it turned out.

Firstly, female attractiveness (as rated by men) is very fair. Most women are around average, with few being very ugly and few very beautiful. Furthermore, women are equally likely to be above average looking as below average looking. The mathematical mean and median are basically exactly at the 50th percentile.

Male attractiveness (as rated by women) on the other hand, is very unfair. Women rate an incredible 80% of men as below average looking.

To answer at this, we can look at data on aspirational pursuit. Aspirational pursuit is basically the tendency to seek out partners more desirable than oneself. One study found that people aspirationally pursue about 21% [2] [note:3], however, this is the average of both genders. Thankfully there are two better datasets on this phenomenon, and thankfully they both define desirability in percentiles as opposed to rated-attractiveness.

Here’s how far up in desirability-ranking people pursue:

Women pursue men they consider worse looking than themselves. This means women don’t necessarily pursue their so-called “looks match”. This is in line with data from old-school dating website hotornot.com, where researchers found that “female members were significantly less influenced by the consensus physical attractiveness of their potential dates than male members were” [3]. Meanwhile, the story for men is completely different.

Men pursue women significantly more beautiful than themselves. Perhaps this seems obvious, Given the widely reported finding that males focus more on physical attractiveness in mate selection than females do. Aslo, men are much less influenced by their own desirability. For instance, one study found that “men’s self-worth was not related to the popularity of the women they contacted” [2]

But how unequal is the online dating market exactly? Here’s the list of datasets I used to visualize this. Some have already been mentioned, some I will explain more.

We can use something called gini-coefficients to quantify inequality. Gini coefficient is a number between 0 and 1, where 0 corresponds with perfect equality and 1 corresponds with perfect inequality. For reference, the gini index of US income is about 0.42; for income in Scandinavia it is about 0.28. Basically, income is more equally distributed in Scandinavia than in the US.

Analysts from the dating app Hinge calculated the gini coefficients to 0.542 for males, and 0.324 for females. The original article has since been deleted, but this is what that looks like.

A blogger also calculated the gini coefficients male face on Tinder to be 0.58. This is even more unequal than Hinge. The Tinder economy has more inequality than 95.1% of all the world’s national economies. 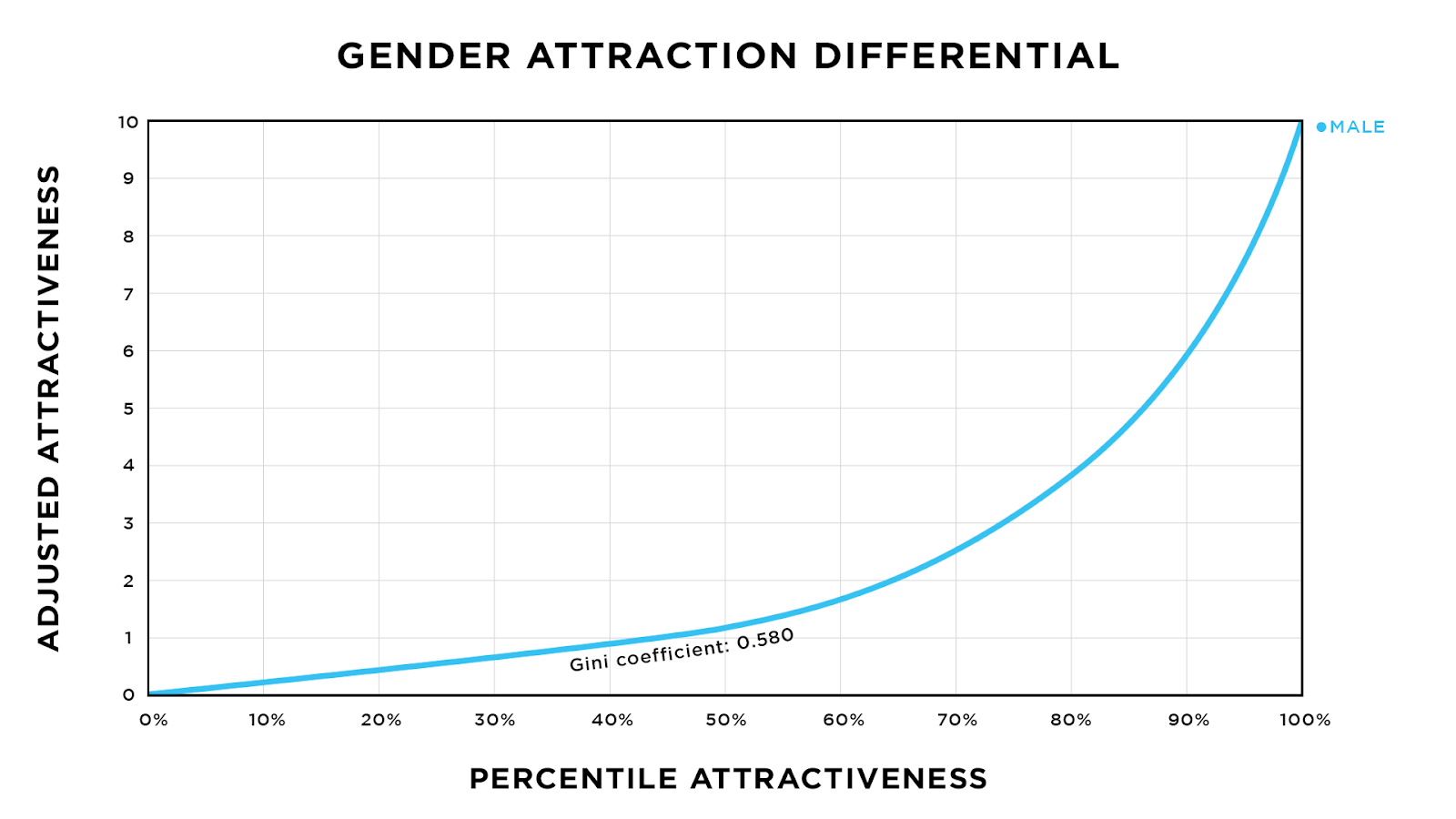 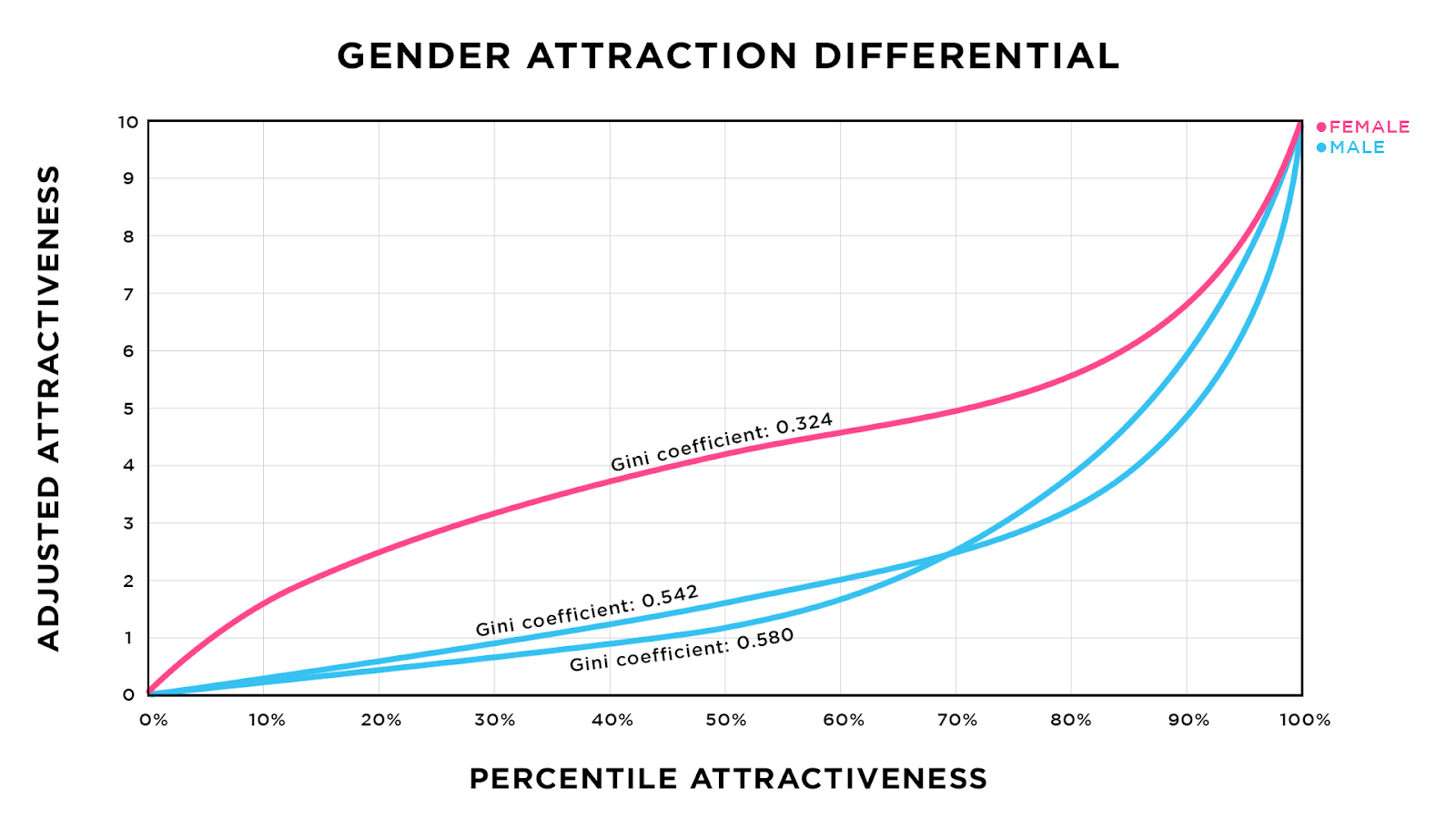 Now, I wasn’t quite satisfied comparing the female-hinge graph to male-tinder graph. I collected even more data (male and female) from swipestats.io. The male side of the swipestats data corroborates the findings from the bloggers experiment, which is good. The data is significantly more accurate than the blogger, but also much more limited. This means the following graph is heavily extrapolated, and should be taken with a grain of salt. That being said, I still view it as quite accurate in light of all of the other findings previously discussed in this article.

Finally, this is what it looks like when we combine all of the previous graphs. That includes data from: OkCupid (rated attractiveness), Hinge (gini coefficients), Tinder (male gini coefficient), and Tinder (swipestats). 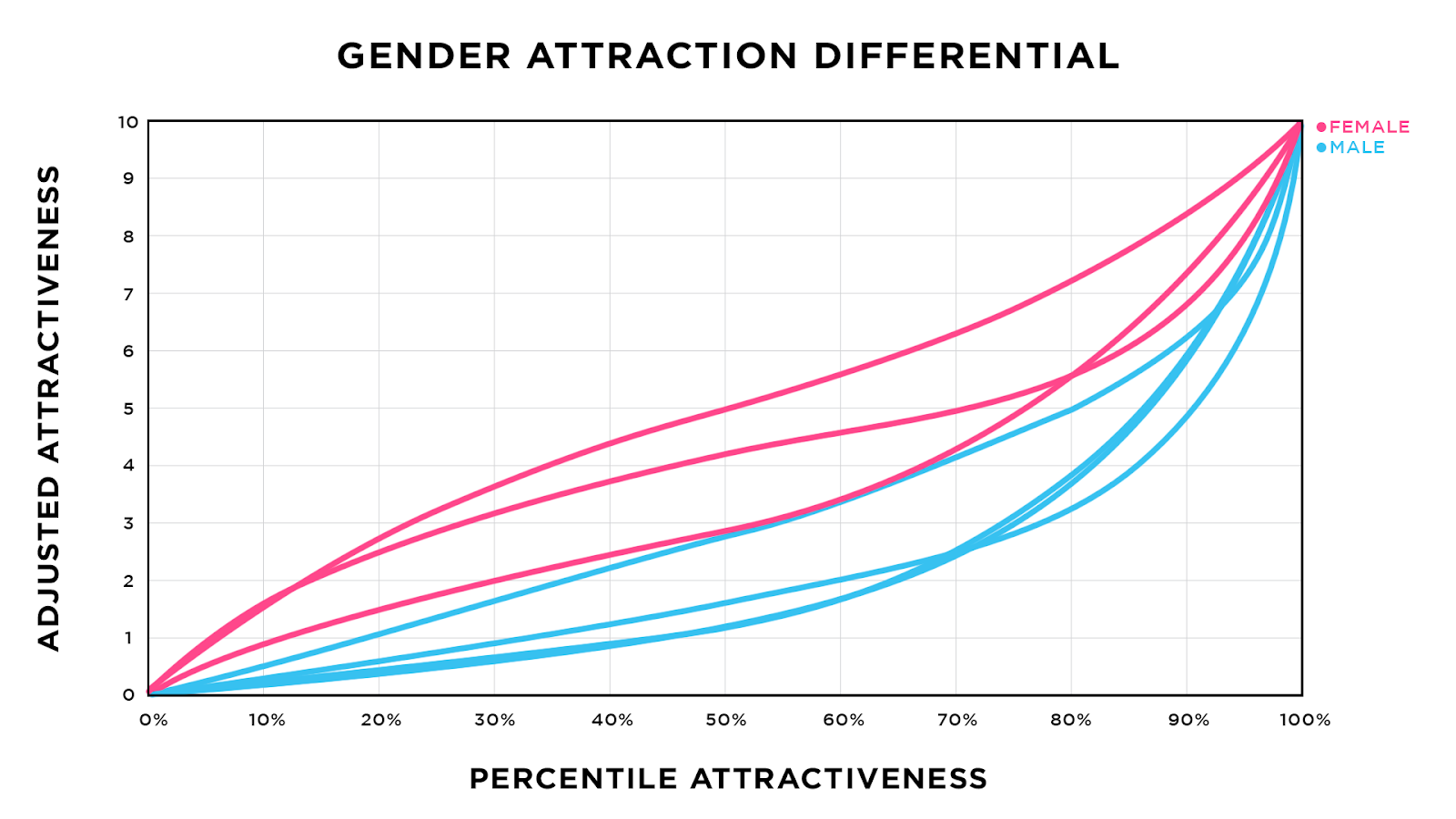 This brings us back full circle. By filling the upper- and lower standardized bound by gender, and adding an “average” line to go with it, we get the original graph that I presented at the beginning. I genuinely believe this to be the most accurate, data-driven, objective, balanced view of the gender attractiveness inequality.

It is true that choice overload causes women to become “increasingly likely to reject potential partners, while for men this effect was either weaker, similar, or not significant.” [12]. That being said, women are still more selective than men even when conditions don’t favor them. One study looked at an Israeli dating service wherein women outnumbered men 1.55 to 1, which found that women are still more selective than men [13].

Just for fun, this is what the combined graph would look like if we include UK childhood ratings, as well as the highly extrapolated Unspecified Dating Platform study.

Original data came directly from OkCupid themselves, but got deleted after significant controversy. Linked is an archived version. The Original link was: http://blog.okcupid.com/index.php/2009/11/17/your-looks-and-online-dating/

Original data from Hinge themselves, but have been deleted after controversy. Googling “hinge 15% of men receive 50% of likes” yields tons of results about it. Original link address was: http://hingeirl.com/hinge-reports/whats-the-biggest-challenge-men-face-on-dating-apps-a-qa-with-aviv-goldgeier-junior-growth-engineer/